Trace minerals – zinc, copper, manganese, cobalt, iron etc. are essential nutrients in animal nutrition.  They can exist in more than one oxidation states and thus has capability to participate in various kind of metabolic redox reactions.

These trace minerals exhibits  wide range of activities and performs various functions within the body, being involved individually or collectively in general metabolism, reproduction, the immune system, growth, development and repair of various tissues etc.

These trace minerals are present in the natural feed stuff such as corn, wheat, soybean, millet etc. However, these they are often in lesser bio-available form and in inadequate concentrations leading to gap between the metabolic need of the animal and the quantity fed through feed stuff.

Trace minerals normally exists as chelates or salts within the grain as plenty of ligands like peptides and proteins and salt forming compounds like fatty acids, flavanoids, lecithins etc. are available in the system. As an example iron is largely available in the bio-available chelate form as iron-ferrin, ferrin being a protein. However, in general, because of competition of plenty of ligands and fatty acids available in the system, it is very difficult to predict resultant bio-availability of the mineral, which further gets complicated by variation in breed of the grain, nutritional management during crop production and the season. 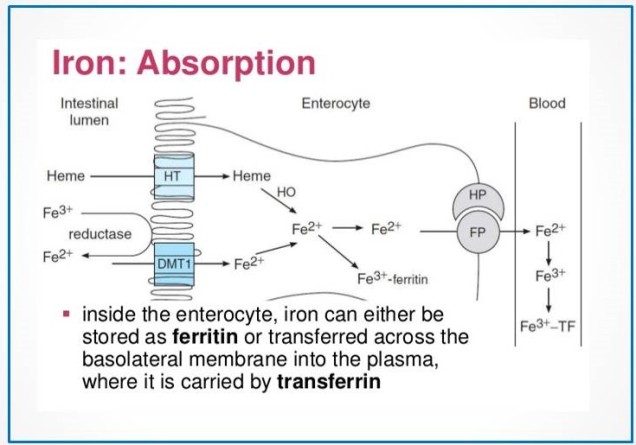 The various feed additives approved as trace element sources can be distinguished in terms of their availability for the animal. The best known and largely used inorganic trace minerals, sulphates and oxides, vary mainly due to their solubility in the aqueous medium of the digestive tract. A product with very low solubility, e.g. copper oxide, should therefore be avoided in livestock feed.

However, the high solubility of sulphates provides the disadvantage of very reactive copper ions, i.e. a strong pro-oxidant initiator and thus  hurries oxidation, which promotes adverse reactions with feed components. This causes the degradation and damage of sensitive ingredients, such as vitamins and fat, as well as leads to formation of harmful free radicals and peroxides and consequent reduction in palatability of feed.

Chelate is defined as a form of organic  mineral which are formed by complexation of the inorganic salts with one or more organic ligands. Chelated trace minerals are the safe choice which increase the bio-availability  by reducing ionic nature of the associated metals and hence increasing its absorption across the intestinal cell barriers. 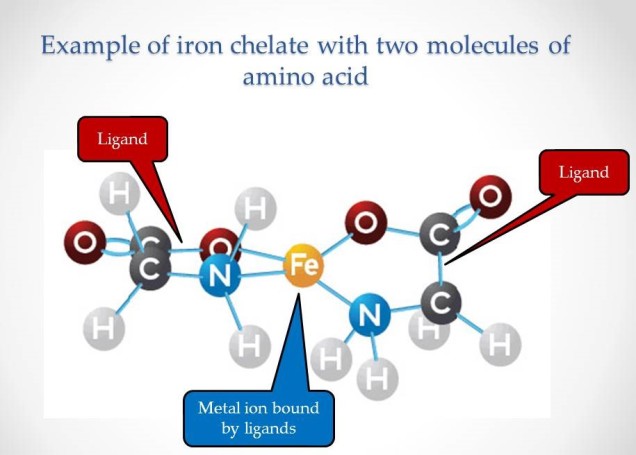 Much trial work has been carried out in monogastrics where stable trace element sources, e.g. chelates or hydroxy trace minerals, confirmed better effects when compared to sulphates with regards to an improved bioavailability, intestinal efficacy and gut health.

In case of ruminants some of the trace mineral chelates provides additional advantage of trace mineral bypassing the rumen to reach the intestine. Few  chelates available in market are bound with ligands susceptible for rumen fermentation and they behave like  naked ionic minerals. Protein hydrolysate, amino acid ligands belong to this kind of category and they under perform seriously from the view point of bioavailablity of trace minerals to the ruminants.

Another factor that need to be considered while choosing chelates is its stability constant. As we know, the chelate forms with its reduced polarity when compared to its precursor ionic form, have better passage capability through cell wall leading to enhanced bioavailability, but may vary in its stability constants depending on nature of metal ion, ligand and medium. To cite an example, we have highly stable EDTA chelate which do not release metal ion even under extreme conditions making it useless from the view point of  requirement of the intestinal cells. The other extreme is highly unstable pseudo-chelates formed from carboxylic acids and some hydroxy acids. 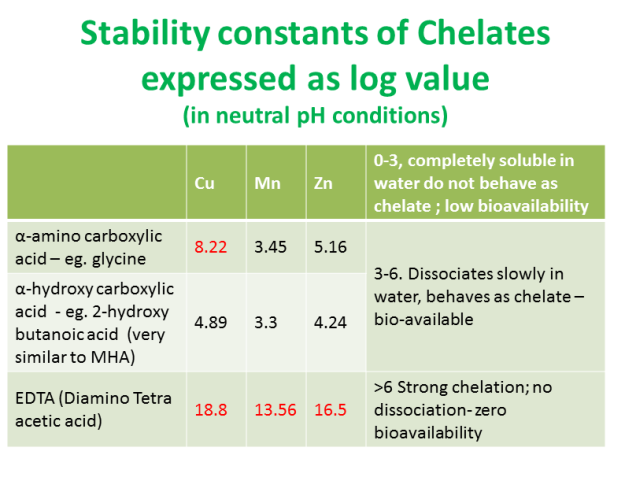 Based on chemistry, kinetics of hydrolysis of chelates and gut conditions and numerous in-vitro simulation and field trials it has been shown that chelates made out of specific amino acids enhances bio-availability.  However the best comes from hydroxy analogs of amino acid chelates both in ruminants as well as non-ruminant species because of extra-stability of these hydroxy analogs of amino acids in acidic pH conditions.

Hydroxy analog amino acid chelates with trace minerals like Cu, Mn, Zn and Fe have been standardized to assure superior bio-availability and is being extensively used as part of productive animal nutrition programs.

The research done in the recent past have confirmed the broad spectrum biocidal activities of copper salts and complexes. During early 1980’s work done by Dr.Phyllis J Kuhn indicated metal strips of…

Gives a brief account of history of use of copper for its antimicrobial activity to present day use of chelate of copper for anti-mold activity especially to avoid mycotoxin formation.

The research done in the recent past have confirmed the broad spectrum biocidal activities of copper salts and complexes. During early 1980’s work done by Dr.Phyllis J Kuhn indicated metal strips of stainless steel and aluminium supports growth of  Escherichia coli,
Staphylococcus aureus, Streptococcus group D, and Pseudomonas species culture, where as those of copper and brass (having 67% copper) showed little or no growth. This is further confirmed recently by researchers from Arizona University.

As such copper and its salts appear to be safe for human skin and tissues and at the same time extremely toxic to microorganisms. With reference to microorganisms, initial site of action for copper ion is considered to be at the plasma membrane. It has been shown that exposure of fungi to elevated copper concentrations can lead to a rapid decline in membrane integrity. This manifests itself as leakage of mobile cellular solutes like potassium and causes death of cell.

During 1761, the discovery that  weak solution of copper sulfate can effectively  deactivate seed borne fungi led to extensive use of copper compounds in agriculture. The year 1885 saw emergence of Bordeaux mixture which is essentially mixture of copper sulfate and hydrated lime for eliminating downy mildew from grapevine yard. Another modification of the formulation by name Burgundy mixture containing copper sulfate and sodium carbonate, followed soon after. Several thousand tonnes of copper salt mixtures have been used  world over so far, for control of various fungus in agriculture and horticulture. At present these early formulations have been partially replaced by synthetic organic compounds, or by compounds that contain copper in a non-reactive chelated form.This helps to prevent the accumulation of high levels of copper in sediments surrounding the plants.

However, use of copper sulfate for fungal and algal control had complications like toxicity of copper sulfate for aquatic species, incompatibility of copper in ionic forms with other salts leading to inactive copper and with water in presence of sunlight leading to slow formation of corrosive sulfuric acid. The environmental impact over copper build-up in sediments, and the need for increased dosages have resulted in the development of copper-organic complexes that provide the copper in more bio-available and less toxic chelated form.

Molds are filamentous (fuzzy looking) fungi that occur in many feed stuffs including roughage and concentrates. Every year a significant percent of the world’s grain and oil seed supply is spoiled or contaminated by toxins produced by molds. The extent of loss varies from 5% in the developed world to 30 % in sub- tropical and tropical countries, resulting in huge economical loss. Molds are capable of rapid growth in the desirable environment of moisture, stress, relative humidity in storage area, temperature, insest infestation and storage time.  This growth results in nutritional imbalance and the production of mycotoxins, which affects animal productivity and human health through the food chain. The mycotoxins of greatest concern include: aflatoxin, which is generally produced by Aspergillus mold; deoxynivalenol, zearalenone, T-2 Toxin, and fumonisin, which are produced by Fusarium molds and ochratoxin produced by Penicillium molds.

One of the chelates which has been found very effective to control molds and prevent toxin prevention is oxine copper. It has been found  to be fungicidal to Aspergillus spp., Fusarium spp. and Penicillium spp. even at very low concentrations. We have also investigated few molecules from nature, which apart from having anti-fungal activity can chelate with copper and hence improve mold inhibition activity many times over. The product under development by us presents synergistic activity from oxine copper and copper chelate of fungicidal molecules from nature.

This is a text widget. The Text Widget allows you to add text or HTML to your sidebar. You can use a text widget to display text, links, images, HTML, or a combination of these. Edit them in the Widget section of the Customizer.
Loading Comments...